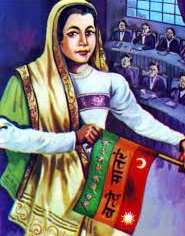 The role of Prawasi (Migrant) Indians in India’s freedom struggle is immense, but somehow their stories of sacrifice and bravery didn’t catch the attention of eminent historians. Even the stories of those freedom fighters who had fought against the British Raj within the borders of India are sidelined so it’s not too difficult to ponder why the stories of the migrant Indian freedom fighters are still untold.

In 1885 she married Rustom Cama who was considered a supporter of the British Raj in India. Due to the ideological difference, Bhikaji Cama’s married life was not successful enough.

Madam Bhikaji Cama is one of India’s most renowned yet forgotten freedom fighters who conducted and established a unique revolutionary atmosphere in several European countries. Due to her dexterous nature, she got the attention of many Indian Revolutionaries. V.D.Savarkar, Shyamji Krishna Varma, and Lala hardayal were some of them who worked and supported this brave Parsi woman.

She came in contact with Shyamji Krishna Varma. Through him, she met Dadabhai Naoroji (The Grand Old Man of India), the then president of the British Committee of the Indian National Conference. She came to work as a private secretary.

Note: Do you know that Dadabhai Naoroji was the first person in Modern India who calculated the National Income of India.

Together with Naoroji and Rewabhai Rana, Madam supported the founding of the Indian House in 1905.

She was present at the opening ceremony of India House which became an important residence for the migrant revolutionaries. She also started the publication of the Bande Mataram newspaper to expose the oppressive policy and unite the Indians to liberate their country from foreign rule.

When V.D.Savarkar published his book on the First War of Independence (1857) it was immediately banned by the British Raj. But Madam Bhikaji Cama published it from Netherland and even sent its copies to Germany and France to raise support for the freedom of India.

She mainly conducted her patriotic activities from Paris, Geneva, and Germany. Immediately her home became a meeting point for all the revolutionaries. She even funded them (especially financially) for conducting their activities. She even met with Vladimir Lenin, the leader of the Russian Revolution of 1919.

Epic Moment for the Indian Revolutionaries

Note: In the year of 1905 when Cama reach Paris she founded the Paris Indian Society with the help of S.R.Rana and Munchershah Burjorji.

We can only imagine the importance of this event as at that time the British back in India had successfully crushed every rebellion and the leadership of INC (Indian National Congress) now focused conducted only moderate methods to meet their demand of Swaraj.

When she hosted the flag she said

The tricolor flag made by Bhikaji Cama had red, yellow, and green color, and the title of Vande Mataram was written on it. It also had the image of the Sun and Moon which symbolizes Hindu Muslim unity.

Note: “Where is the other half of Egypt? I see only men who represent half the country! Where are the mothers? Where are the sisters? You must not forget that the hands that rock cradles also build persons”,

Madam Bhikaji Cama at the National Conference of 1910 in Cairo, Egypt

Due to the outbreak of World War 1 in 1914, the relation between France and Britain stabilize, and due to this alliance Madam Bhikaji Cama was forced to leave Paris.

Note: Vladimir Lenin reportedly invited her to reside in the Soviet Union years later but she declined.

In 1915 the French government deported Madam Cama to Vichy where she was interned. Cama remained in exile in Europe till 1935. During this time she had suffered from a stroke that paralyzed her and due to this, she petitioned to the British government to be allowed to return home. Madam Cama arrived in Bombay in the year 1935 and died nine months (13 August 1936) later, aged 74.